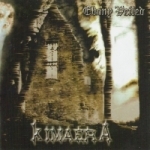 KIMAERA from Lebanon are one of the bands which deserve a kind of exotic bonus mainly due to their mother country. Metal bands from the Middle East are normally incorporating some kind of local influences into their music and bands like NIGHTFALL, ORPHANED LAND or SEPTIC FLESH could be named without a doubt as cult acts for their local and the international Metal scene. This is normally the case but for KIMAERA all these rules are not really applicable! They are much more influenced by the Gothic / Doom Metal veterans of the early 90s than by their cultural background and the British scene must be named as their main musical source (ANATHEMA, PARADISE LOST). But it’s a pity that KIMAERA are following these veterans so much in detail that the songs had become so predictable. I was really trying to find the special moment during the 52 minutes playing time and two / three songs are offering some nice parts to the listener but in total “Ebony Veiled” is nothing more than a vague copy. www.kimaera.info; www.stygiancrypt.com