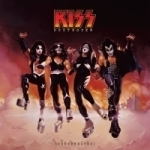 On July 16, 1976 the life of a 10 year old German boy was changed forever… In a way you can blame it on the infamous TV presentator Thomas Gottschalk, who had just started his career at the time with a music show called "Szene 76" on German television. On that particular show a band from the US called KISS was also featured with live- and interview-footage and all that impressed the kid so much, that he immediately had to get his hands on one of their records. Even though KISS were just promoting "Destroyer" at the time, the first album he bought from his small pocket money was the double album "Alive", most certainly based on the impressive visual experience on TV which was captured in a quite similar way on the front cover picture. But since "Alive" is still one of the greatest live records of all time, the decision wasn’t that bad and fueled the fire even more. From that moment on more records were bought, as well as every teenager magazine that had the tiniest little write-up or picture on KISS in it… and the kid started to realize pretty quickly that he had turned into a die hard KISS fan. All of a sudden this band had become way more special to him than his previous alltime faves THE SWEET. Why I mention all this to you? And why we do a KISS review in VOICES? Well, as you probably have guessed already, the mentioned young boy is yours truly, so without KISS this magazine wouldn’t exist for sure! Over the past 35 years I still have played KISS records on and off very regularely (especially the 70s stuff), so I guess it’s safe to say that I know them all pretty well… And I got very excited when I heard the news that there would be a reworked version of "Destroyer", since that record is still one of their strongest from the early days with songs like ‘Detroit Rock City’, ‘King Of The Night Time World’, ‘God Of Thunder’, ‘Shout It Out Loud’ or ‘Beth’ who all easily stood the test of time and therefore can still be found in the band’s setlist these days. Needless to say that I was really curious what kind of treatment the record would get and what kind of specials would be added… Well, I hate to say this, but after I listed to "Destroyer (Resurrected)" a few times now and even carefully compared it with the original album, I must say that the differences are almost non detectable. Ok, the remix did do some justice to the fact that the whole album sounds a bit more dynamic and they might have added some very little details here and there, which still appeared on the original mastertapes, but didn’t end up on the album in the first place… BUT: even as a KISS die hard, I was having a tough time to really notice those changes so that a regular Rock fan probably wouldn’t notice them AT ALL. And regarding bonus material this is another big letdown, because the only extra you get in this department is the album song ‘Sweet Pain’… just with a different guitar solo… and that’s about it already! I mean, c’mon – everyone knows that there’s tons of unreleased music in the KISS vaults, so why didn’t they use some of it in order to really do justice to this re-release? Just have a look at the double CD, deluxe re-releases of bands like BLACK SABBATH or THIN LIZZY that have been put out the last couple of years… that’s what I call highly interesting and what makes the decision pretty easy to buy those albums again. In the case of "Destroyer (Resurrected)" the only cool thing is probably the fact that the original coverartwork finally got used (the wellknown cover as well as some vintage pics and liner notes from producer Bob Ezrin complete the booklet) and that the CD itself looks like a Casablanca Records vinyl replica. But I doubt that you’re willing to buy the album again just for that… Don’t get me wrong though: if you have plans to buy vintage KISS records and haven’t bought "Destroyer" yet, this is a good opportunity to go for a better packaged and slightly better mixed version… I just wished die hard KISS fans would have received a bit more as well here… www.kissonline.com, www.universal-music.com