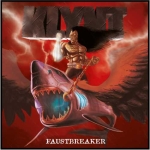 Wow, here we have a tough one. I actually don’t know where to start since it’s not my thing to just bash a band’s music I don’t like because there’s usually at least something positive to find, but here we just reached a whole new level. KLYNT is a 4-piece who according to the band-members themselves play EPIC AS FUCK THRASH METAL (this is where the joke starts) and hail from Austria. After tormenting myself by repeatedly listening to all of the 53:02min playing time that “Faustbreaker” has to offer I’d simply call them a parody, something EMP and / or Nuclear Blast aficionados would idolize as fuck. What the band offers is a splendid mix of melodic, almost Gothenburg-ish riffs wrapped in the best Guitar-Rig tones you can find with Angelo Sassos little brother behind the “kit”. On top of that you get a singer who tries to mock Peter Steele’s legacy as much as he can. Of course there is some MAIDEN here and there, nice leads and sometimes even nice arrangements but nevertheless this is nothing one would or should consider a real band. When thinking that there’s people out there playing their asses off, rehearsing constantly and playing shitty shows in front of 15 people all across the globe doing nothing else besides hailing Heavy Metal and living it second by second it’s actually pretty sad to hear something like “Faustbreaker”. It’s almost as if they’d try dragging Heavy Metal through the mire which is why I don’t want to waste any more words on this release. In case you love SABATON, WINTERSUN or any other band that’s close to their level of brilliancy go support them via www.klyntemall.com, http://klynt.bandcamp.com or www.facebook.com/klyntmetal.