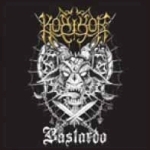 The most wellknown Black Metal horde hailing from the islands of the Philippines presents us its new output. The quartet which saw its dark light of day in 1998 in Davao City takes again no prisoners and rages merciless through the eight tracks of the album which is entitled “Bastardo”. Total blasphemy reigns supreme again and everybody who know them from one of their previous works will have an idea what to expect from this release. KORIHOR thrashes their bestial Black Metal in the typical South East Asian vein which will let your ears bleed. Of course this output will just appeal to a true and proud fanbase as the stuff is (luckily) too extreme and bestial for the mainstream. As for me I am concerned I enjoy their material and all of their previous assaults as well. The CD includes four new songs and four live tracks which were recorded at the Blazing Annihilation gig in February this year. The new songs are played without any compromises and remind me sometimes a little bit on old ABHORER stuff. These Filipinos try to vary their stuff within their stylistic frame and basis and they are able to incorporate some cool Thrash parts and elements into their sound. Tracks like the excellent opener ‘Satanik Hellbangers’ or ‘Uproar Of The Bastardos’ can convince me and I can claim that the new compositions are their best songs so far (in matters of songwriting and also production wise). The tracks have a good structure, tempo changes and cool breaks. Of course the songs sound all a little bit similar to each other but this can not be avoided when you play this kind of bestial stuff and many other bands have this problem as well. The sound quality of the live recordings is of course a little bit weaker and is nothing for HIFI fetishists, but who gives a fuck? A cool album for all Hellbangers out there who are into bestial and exotic Metal. Kumusta Obispo? Nagaling ang trabaho mo! Mabuhay sa Pinoy Black Metal! Get in touch with the band at www.korihor666.cjb.net or the label www.hippieshredder.com