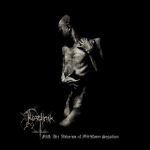 Sometimes it’s not that easy to write about a record of a band you never heard of. KOZELJNIK is such a case. We have a duo from Serbia here, consisting of singer / guitarist / bassist Kozeljnik, who’s also active in MAY RESULT and THE STONE, and L.G., the drummer of both bands. Since 2006 they recorded a demo EP and two full length albums, "Sigil Rust" (2008) and "Deeper The Fall" (2010). Now, after a more than two year break, they are back with "Null: The Acheron Of Multiform Negation". Four new songs (and two very old bonus tracks) are on this EP, which was recorded with THE STONE bassplayer Usud as a session member. Those songs will probably leave an unsuspecting listener puzzled after hearing them for the first time. But the more often you give this record a listen, the more it grows into a brilliant work full of melancholy and complex songwriting. If you want, you can find more than one hint on early IN THE WOODS… in the style of composing and creating a dense atmosphere, but these hints are only cornerstones for KOZELJNIK to create their truly own Black Metal, their own expression of negativity and gloom. The opener ‘As If Through A Myriad Of Shades’ already starts off with a melancholic guitar harmony before a riff takes control, that would fit any Doom Metal act perfectly. Clean, slightly rough vocals pave the way for an epic gloomy chorus, whereas the lead guitar reminds me of older MY DYING BRIDE or ANATHEMA. In the progression of this long song, reminiscences of early IN THE WOODS… shimmer through more and more. The aggressive mid tempo riffing in the beginning of ‘Evoking The Furtive Depths (Reprise)’ soon gets interrupted by faster Black Metallic attacks. The middle part offers pure blackened melancholy. ‘Time, Neglected In The Wound Of A Martyr’ is probably the song that is rooted most deeply in classic Black Metal, even though it still comes along quite epic and offers some very melodic moments, that create a feeling somewhere between IN THE WOODS… and DISSECTION. A very special, character breaking song on "Null: The Acheron Of Multiform Negation" is the final new track, ‘Come, Thou Abhorrent And Inscessant’. The guest vocals here are provided by Niklas Kvarforth (SHINING), who always walks the thin line between distorted sanity and utter madness here. His performance walks on the paths of a gloomy and sometimes even dissonant black anthem, with outbreaks especially by Mr. Kvarforth, that set the stage for mental chaos and complete insanity. Outstanding! As a bonus, we have two songs here which were released on their first demo (CD-EP and tape) in 2007. This demo was called "Wrecked In Ruins Of Solitude" and was the first ever release by KOZELJNIK. As a tape, it featured two rehearsal recordings along with two "proper" studio recordings, which were planned, but never released as a 7". These two songs can be found here and show KOZELJNIK in year one after their formation on the way to find their own style. Definitely more rooted in Black Metal, these songs already hint on great things to come, despite the quite raw sound quality. Especially ‘Scrouged With Apathy’ offers raw blackness, while the title track is a little more in the melodic vein. Well, these bonus tracks are somehow dispensable and won’t fit with the four new tracks, but these are great stuff for all those who look for new gems in the reign of Blacker Metal. Visit www.kozeljnik.com or check www.facebook.com/kozeljnik, where you can listen to two of the new songs of the EP.