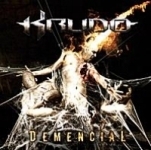 Sweet Chilean Metal… Chile being one of South America’s strongest countries for producing some quality Metal worldwide. KRUDO (a Spanish word, and meaning raw in English) have also got their debut full-length released in the beginning of this year; an album titled "Demencial". KRUDO use their own language Spanish in the songs that in fact, include bits and pieces from Thrash, Death, Groove and Heavy Metal. It’s somewhat hard to pinpoint the band’s exact musical style on "Demencial" that well, even if the main emphasis is kinda clearly on those technical and progressive Thrash Metal elements within the band’s, kind of challenging – and new waters finding sound. There’s definitely lotsa talent in the KRUDO camp, and in a way it’s interesting to hear them performing their songs by using the Spanish language. Vocalist Christian Arriola would actually suit better to some Power Metal band as far as his vocal department on "Demencial" is concerned. The guy’s got a good and strong voice, which rightfully defends his position as being KRUDO’s singer. The songs overall have quite a few dimensions absorbed into them, making this record not that easy listen for people. With a few careful rounds, the album starts opening up better and better during each listening session, so don’t be scared if you won’t get anything out of this at the first time. Thought out and professionally composed record this is all in all, progressive Thrash Metal being absolutely closest term to be used for describing KRUDO’s stuff on "Demencial". I liked this album quite a lot indeed, hence I would warmly recommend it to you as well. www.myspace.com/krudometal, www.digmetalworld.com