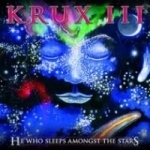 The third chapter of Swedish Doomsters KRUX’s saga has now been completed – and let’s just hope it’s not going to be the band’s last chapter. I mean, "III – He Who Sleeps Amongst The Stars" is very easily one of the most outstanding and masterful Metal albums I have heard in the entire year of 2011; really speaking for great volumes of this sort of super-group’s songwriting skills to reach certain levels of perfection as far as the quality of their song material is concerned. KRUX have this monster-like ability to create very powerful and catchy-as-fuck atmospheres that go through your skin exceptionally well – and making you craving for more. That’s the case with KRUX’s 3rd album as well: "III – He Who Sleeps Amongst The Stars", is a true monster-like album; full of the already known and brilliant ingredients that we all have used to hear from their previous releases already. Whether we have the band’s so far the most pleasing album in our hands – well, you be the judge. For me, every song on this record is simply ‘ace stuff’; like shining, polished diamonds that everyone of us would like to own. KRUX have a full plate of them on offer on their 3rd opus (and hopefully not the very final) – and each one of them shines brighter than anything else around them. Seriously, all that professional musicianship that has always been involved with KRUX, is beyond any words really. Leif Edling is an amazing songwriter as we already know him to be, the vocals of Mats Levén are superb – not to talk about the other experienced musicians they have managed to gather around the KRUX line-up (Fredrik Åkesson on guitar, Jörgen Sandström on guitar, Peter Stjärnvind on drums and Carl Westholm on keyboards – quite a line-up, I would say). We all know already where these talented men come from – their history in other bands and so on, so there’s really no need to give any brief introduction about them at all. However, let me say this: all the seven songs they have composed for KRUX’s 3rd record, are diamond-hard highlights in their own right. You cannot avoid comparing their sound to that classic sound of the Swedish Doom Metal kings CANDLEMASS completely either, but then again that has always been the case between KRUX and CANDLEMASS due to Leif’s strong fingerprints in both of these aforementioned camps. A great thing about KRUX is that their magical and progressive Doom Metal never let you down; it works like a well-calculated strategy, in which one is able to underline every single detail with a heavy marker, kind of pointing out each song’s perfection – just to state the obvious: the KRUX guys are refused to fail whenever they hit their musical ideas and visions into the same note cauldron where magical things start to happen. The album opening track – and the title track of the record, ‘He Who Sleeps Amongst The Stars’, is a perfect example from these fellows’, sort of inborn ability to compose ‘greater-than-life-itself’ tunes; the catchier and more twisted sounding – the better. It’s unquestionable but that’s where they are true champions at. Also, KRUX’s overwhelming musical ability to dive deep down into the very core of a song structure – and dig exactly the right components out from there for their songs, is beyond any understanding. I have no idea how they do it every time, but they do it anyway – blessing all of us with awesome pieces of music that makes us to wish a long life for KRUX. "III – He Who Sleeps Amongst The Stars" gets five shining stars from me, and hence it’s even relatively easy for me to crown this record as the ‘Metal Album Of The Year 2011 ‘ title. Great, such a great work guys! My sincere and humble congratz for this! You guys are blessed with incredible musicianship, no doubts. www.kruxdoom.se, www.gmrmusic.se