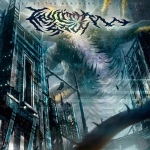 Brutal Death Metal from Berlin has become some kind of trademark, since there are lots of bands in Germany’s capital following the path of CANNIBAL CORPSE, SUFFOCATION, DYING FETUS or dozen other bands. KRYLITHSIC are active since the year 2009 and besides the "Leech Of The Parasite" EP nothing else was released. The self-financed promo or demo called "Beast Of The Northern Hemisphere" features eight tracks, where the two songs ‘…And He Saw That It Was Blood’ and ‘Leech Of The Parasite’ got recycled as bonus tracks from the mentioned EP. The band already received a bunch of good reviews and I guess this one is going to be the next one in that row. It is all there what is needed. Technical skills, well thought out songwriting balancing the breaks, blast-beats, guitar-solos and incredible inhuman vocals the right way. The more I listened to this output the more I got angry about myself spending money on half-baked albums of bigger or more well-known bands. Ladies and Gentlemen, time to support the underground again! Visit www.facebook.com/krylithsic or https://krylithsic.bandcamp.com