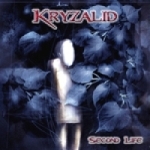 Is “Demo of the Month” in french Rock Hard Magazine a criterion for Voices readers? Well, listening to KRYZALID’s debut CD “Second Life” I would easily answer no! This record just has two big weaknesses that will hinder me from listening to this record again in the future. If you play melodic Thrash Metal in the vein of old ANNIHILATOR and MEGADETH your music should either capture the listener with you remarkable playing-technique, with gripping song structures or with sheer power. Second: the singer should lay his (or her) charismatic voice crownlike over your majestic song castles. Unfortunately KRYZALID did not know that! The musicians are quite skilled and technical, yes, but they simply lack of talent to write parts or even songs that make you scream, cry, bang or jump out of the window. This just does not kick anything! And what makes it worse is that you hear they all know how to play their instruments. In fact they are even quite good – what a waste of talent! In German there are words like “dudeln” or “plätschern” which I cannot translate but hope that you get the meaning. It just flows by… Was it just for the music I would have given this four-piece another chance. But there still is the vocalist-question to answer and this aspects vehemently refuses to give me another try! The vocals just suck! It is not only the French accent (it gave MASSACRA back then a unique touch, hehe) but the all-over lack of talent. “Damn, the songs are finished but we don’t have a singer! You do it, you have the longest hair of us!” There might have been other reasons for choosing this singer (greatest collection of tennis socks, owner of 27 He-Man figures – who knows) but ist was definitely not talent!! Bad, pseudo-melodic, ultra-low aggressive with a pronounciation that pulls your shoes out. Even the last track – a (musically good) coverversion of ANNIHILATOR’s classic ‘Alison Hell’ – is barked into irrelevance. KRYZALID danced on a small edge, tumbled and fell. But if they get rid of that singer and focus more on gripping songwriting their next release could be a real killer. Could! www.kryzalid.org, www.thundering-records.com