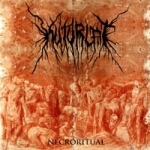 While not the most original Black / Death band in the world, KUTURLAT, from Madrid, Spain could easily alter this perception if they dropped the unnecessary Black Metal references behind and leaned more in the old Death Metal direction that is so prevalent and simultaneously given here as a background to this album. In other words, you don’t have to play shitty Black Metal to be evil! That said, what is presented overall on “Necroritual” is I feel what could and should be used and interpreted as a template of what they ought to work from for the future. To use this album as a reference to realize what works for their “sound”, what doesn’t, and what pitfalls to stay clear of. Not to mention either what exactly they are trying to convey to the listener as opposed to the barrage of riffs and song ideas that are offered on “Necroritual” and instead leave the listener feeling devoid of what it is exactly that they are supposed to be appreciating. On that note, this album was professionally recorded at VRS Studios (HAEMORRHAGE, AVULSED, WORMED), with yet another a superior layout accompanying this disc from Mondongo Canibale, not only both in tray card and CD booklet, but as well as on the actual CD. Contact: Mondongo Canibale Records, P.O. Box 27106, 28080 Madrid, Spain, www.mondongocanibale.com