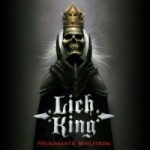 LICH KING is a Bay Area influenced, old school Thrash Metal five-piece from Massachusetts, USA that totally worships the good old classics by EXODUS, VIO-LENCE, FORBIDDEN, HEATHEN, DARK ANGEL and the likes. Their debut full length “Necromantic Maelstrom” originally came out as a CD-R (at the time self-released by the band), but then California’s Stormspell Records got involved and officially re-released it professionally in November 2007. Their version also offers a booklet with all the lyrics now. Even though I totally appreciate the band’s attitude when it comes to playing pure fuckin’ Thrash Metal in the good old tradition, there’s still lots of light and shadow connected to this album nevertheless. Most annoying to me personally is the overall very poor production of “Necromantic Maelstrom”, which reduces the listening please A LOT! There’s even some sound differences from song to song, so that it actually comes across more like a compilation of various recording sessions… I’m not sure, but due to the fact that back in 2006 there also used to be a LICH KING demo of the same name (with a little different tracklist though), some of the songs simply may have been added from there?! At least its cover-artwork is also featured in this CDs booklet… But anyway, fact is that the vocals most of the time have this typical raw, 80s feel to it instead of offering us the usual and heavily overused boring Death / Thrash mixture that became a big fashion the last couple of years. You may remember that the first wave of Speed and Thrash Metal acts originally used to mix the sound of the NWOBHM genre with the aggression and intensity of old Hardcore… Well, the same could be said about the vocals on this album here. Unfortunately they are often way too much upfront in the mix though, so that the guitar department suffers a lot from this. Can you imagine an EXODUS record blowing out of your speakers without Gary Holt’s gallopping riff attacks upfront? It simply won’t work! And on this album LICH KING have exactly that problem: the guitars definitely have been pushed too far in the background which results in a big loss of energy that the songs originally could have delivered. It’s really a pity as both the LICH KING guitarists come up with some incredible riffing throughout the entire record. In particular ‘The Werewolf’ and the instrumental ‘Bleeding And Screaming’ are totally killer in this respect and easily blow away a lot of the newer EXODUS stuff! On the other hand, parts of the soloing still leaves a lot to be desired here and the back-up shouts in ‘Reavers’ are nothing but horrible! I’m also not really a fan of silly nicknames and LICH KING without a question went for some of the most ridiculous choices in the history of Metal EVER: A Fucking Tyrannosaur (vocals), Rambo (lead guitar), The Hulk (rhythm guitar), Darth Vader (bass) and Hulk Hogan (drums). But these guys seem to have a really weird sense of humor anyway, which is partly also reflected in their lyrics. The best example here being ‘Mascot War’, which deals with a battle between famous American breakfast cereals (!!) and Metal mascots such as Sgt. D, Vic Rattlehead and good old Eddie!!! The album also includes two cover tunes (‘A Lesson In Violence’ by EXODUS and ‘Bodies On Bodies’ from VIO-LENCE), of which the VIO-LENCE track definitely turned out more convincing to me. But despite all the criticism, this is already a quite enjoyable debut and if the band will manage to improve (especially) the production next time, LICH KING quickly might turn into a really strong force within the Thrash Metal genre. Oh, and before I forget: vinyl freaks will most certainly be pleased to hear that “Necromantic Maelstrom” also came out on vinyl earlier this year, limited to 1000 handnumbered copies though (the first 100 on clear vinyl), so you better hurry up if you’d still like to get yourself a copy of it. For all further info check out www.myspace.com/lichkingband or www.stormspell.com