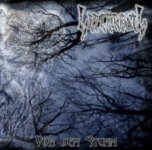 Cool intro! Moody piano. Could serve as soundtrack for an old horror movie. Vaguely reminds me of Berlin’s AMOK VEDAR. Not only the intro. Is this German Black Metal identity? Well, maybe… LIFTHRASIL from South Germany play rather melodic Black Metal. But don’t be afraid: the omnipresent keyboards sound quite original. I miss a certain coldness, though, which pretty much defines Black Metal for me. So sometimes I tend to call this Gothic Metal but that doesn’t really do any justice to LIFTHRASIL, either. Actually, they kick quite some ass although their music is rather mid-paced. The guitars sound a little untypical in my ears as well: pretty dirty and mean considering the style they’re playing. Not cheesy at all – even the German lyrics are solid! LIFTHRASIL sound utterly German but – believe it or not – in this case that’s a compliment and especially because they’re good songwriters this might actually ROCK in a live situation as well. My faves are ‘Das letzte Gefecht’ and the groovy (!) ‘Nagelfar’ (shouldn’t this be written without an “e”?). Thumbs up! www.lifthrasil.de