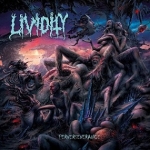 “Perseverance” is the fifth full length album released by the Illinoisian brutal Death Metal band LIVIDITY. A pretty well known name in the brutal Death Metal underground, especially in the late 90s and in the early 2000s when this scene lived its golden age. During these years LIVIDITY released a bunch of killer titles such as the legendary “Fetish For The Sick” EP, the albums “The Age Of Clitorial Decay” and “…’Til Only The Sick Remain”. Unfortunately for them, they never got the recognition of DEVOURMENT and now in 2018, whereas their countrymen from Texas are signed to Relapse Records, LIVIDITY’s new album is released by a small label from Slovakia in only 500 copies. Another great band that is a victim of the hard times that have hit the underground music industry in the last years. So, established that not even the big names generate good sales as they did before, LIVIDITY have the merit of having released another killer album. Here we have 12 songs for 36 minutes of grinding brutal Death Metal in the purest American way. “Perseverance” is violent, aggressive and brutal with catchy riffs and some slammy parts here and there. The drumming is intense and fast with many blastbeats and an extremely tight double bass. The distortion is fatty and heavy, the guitar work is coherent, semi-technical and never gets boring or redundant. The song structures are in the typical LIVIDITY vein: three minutes on average and some short one minute grinding tracks. Von’s vocals are ultra deep, guttural and fit perfectly with the music; if you’re into his growlings style, check out his previous band DEADEN, that in 1997 released one of the best album of American brutal Death Metal, called “Hymns Of The Sick”. As always, LIVIDITY’s lyrics deal with gore, porn, serial killers and snuff, all characterized by a depraved and misogynistic black humour. In conclusion, this a sick brutal Death Metal album, well played and with a killer artwork. If you’re into bands like WACO JESUS, INTERNAL BLEEDING, SEPSISM, GORGASM, early CANNIBAL CORPSE etc, it’s for sure a must have. Otherwise stay away from it, especially if you’re a supporter of the #MeToo movement! More info here: www.facebook.com/lividityofficial, www.metalage.sk

LIVIDITY - ...'Til Only The Sick Remain - by Ramon Claassen