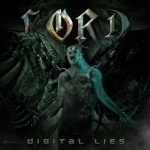 If you see the cover art you might as well think this band plays some sort of mechanical Death Metal. But this is actually some sort of the Australian band DUNGEON using a new and very unoriginal name. Still, for what I remember DUNGEON, this new band is doing a very similar style. This is a depart form all that high speed, demonic vocals I am used to. This time we have a very competent Speed / Heavy / Power Metal band that on one hand has a very heavy guitar sound, but on the other still use some useless choirs that give them more a very melodic Power Metal approach when one can hear they can do it quite well without using that style. I must also ad that once in a while they use more aggressive vocals, so at least in that area the variation is quite secured. At times the band sounded to me near to what ICED EARTH is doing nowadays, which is a good thing. The band really proves to be a top form Speed Metal act as songs like ‘Point Of View’ prove. There is also the mandatory ballad on the album, which again makes the balance of the whole to be more towards the Power Metal realm… whatever that means. Overall it is not a bad album, but I would prefer something more in the traditional Heavy Metal or Speed Metal vein, rather than a band playing a few different styles. I am sure that some of these songs will make to bang your head and some others to throw up. But that it’s up to your taste. www.lord.net.au, www.facebook.com/lordofficial