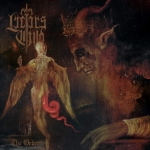 This is my first encounter with LUCIFER’S CHILD from Greece, formed by George Emmanuel (ROTTING CHRIST) and Statihs Ridis (NIGHTFALL). The Greeks released their debut, which earned some applause with its melodic Black / Death Metal, back in 2015. After three years of silence they are now back on track and I am still amazed how much music can be performed within three-quarters of an hour. "The Order" is bursting with creativity, the ideas packed in one song may have served other bands for a full-length. Nonetheless LUCIFER’S CHILD are focused on writing songs, the eight tracks are not just an uninspired sequence of different styles. Black Metal is the integrating element of all songs, but each one is on its own way exceptional. The opener is a fast-forward crushing attack, followed by the title-track, which at the same level, although the crushing element are the milling mid-tempo parts. With a running time of eight minutes ‘Through The Fire We Burn’ is the longest song, starting and ending very slow with acoustic guitars, but in between knows to convince with an arc of tension. This is just a short insight of what is to expect, furthermore we have slower parts, melodic leads as prime movers of dynamic songs, versatile vocals and some keyboards here and there. An enjoyable album from first to the very last second, a top-notch sound and, as icing on the cake, a brilliant artwork. LUCIFER’S CHILD defined how Black Metal should sound in the year 2018. Convince yourself and visit www.facebook.com/luciferschildmusic, www.agoniarecords.com