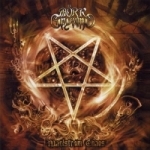 It is always great to discover bands you can trust and rely on. But it is far greater if you find a new record of a band of that particular kind that has been regarded as “dead” for a couple of years. The same goes for MÖRK GRYNING. After a break of around four years MÖRK GRYNING are ready to strike back with their third album “Maelstrom Chaos”. And they do it with might! It is unbelievable how fresh and dedicated this album sounds. You might call the basic sound typical Swedish Black Metal, but it is far more than that. There are so many great ideas incorporated in their songs that the quality of this record is far over the standards. The ones who are familiar with the predecessors “Tusen År Har Gått” and “Return Fire” probably can imagine what I am taking about. Compared to these previous albums “Maelstrom Chaos” is a quantum leap in progress especially when it comes to the composing skills: take the best elements of both their predecessors, mix them up with new ideas and a big portion of professionalism. Referring to the latter you easily notice that MÖRK GRYNING have had deeper views into the classical ways of composing music. First of all the way of giving their compositions the right shape does not follow frequently trodden paths. Secondly the instrumental accentuation fits precisely together. Be it ultra fast passages, timidly placed breaks, acoustic guitar passages, progressive or sympathetic solos, furious drumming, breathtaking high speed twin-guitar-melodies (I have not heard such beautiful twin-guitar-melodies for ages!), everything is an exact piece of a puzzle of the whole whirlwind. If you followed my lines until this point and got the impression that “Maelstrom Chaos” is a polished product you are (fortunately) completely wrong. In contrast this album possesses all a (Black) Metal record needs: it is sharp, harsh, very metallic, atmospheric, varied and full of surprises. MÖRK GRYNING were clever enough to crown their genius work with a very suitable landscape in sound and recorded this album in the legendary Grieghallen / Bergen under the working hand of Pytten. This man was absolutely the right choice and he has shown again that he is the capacity when it comes to Black Metal. Having the genre in mind it may sound a bit like a parody but the production of this album is so unbelievable vivid and detailed, just great! I better stop praising this milestone now and kneel once the day towards both, Stockholm and Bergen, which I hope you meanwhile do yourselves, too.