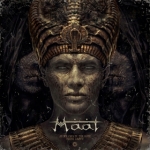 MAAT
As We Create The Hope From Above
(Aural Attack Productions)
45:12min

At first I was a little bit irritated because of the band’s name. The German term “Maat” stands for a marine service grade. Petty Officer Second Class is the equivalent in the navy. But the five guys from Berlin, Germany, are referring to the ancient Egypt goddess called “Maat”, who symbolizes some kind of principle or concept of world order, justice and truth. Quite interesting if you are interested in suchlike stuff. Egypt with its 7.000 year old history and mythology has always been a great influence to the Metal scene, just think about the stunning video for ‘Seasons In The Abyss’ by SLAYER or the magnificent “Powerslave” artwork by IRON MAIDEN. This output is the band’s first full-length album, in 2010 they released the mini album “Sobek”. On “As We Create The Hope From Above” you will discover nine tracks of fine Death Metal. More into the American style, names like IMMOLATION or HATE ETERNAL make an appearance in my mind. Especially IMMOLATION, since the vocalist sounds like Ross Dolan. A fact which is definitely a sign of quality. Thinking about the combination of Death Metal and Egypt mythology one is compelled to remember NILE. Karl Sanders is the man who invented the so-called Ithyphallic Metal and cultivated this style for many years. Comparing the two bands MAAT and NILE I think MAAT is the one band which puts it more straight. Less technical, which does not mean they can not handle their instruments, but the Germans seem to emphasize more on short, strong and solid songs. So all those who do not want to wait for the next CANNIBAL CORPSE album (which is going to be released this September) or generally are interested in brutal Death Metal and discovering new bands, check out MAAT! Up to now one of the best debuts this year from Germany. www.maat-music.com, www.facebook.com/maatoffical