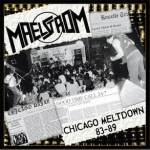 I can’t hide from the truth: I’m totally into old bands’ reissues. But, are we sure that every act from the 80s deserves a reissue treatment? No, I’m not sure at all. Nowadays there are tons of clones of the cult bands from the past – we know it and we have to accept it – but even in the 80s there were imitations of the big names. Each local scene had its VENOM, SLAYER, MORBID ANGEL etc copycat bands and MAELSTROM was probably the Chicago answer to the Canadian Speed Metal kings EXCITER. MAELSTROM was founded in 1983 by the Sanzeri brothers, Nick (bass / vocals) and Joe (guitars), together with their friend Jeff Haske (drums). I had never heard about them, mostly because they lasted only six years (from 1983 to 1989) and they have a very very short discography. MAELSTROM released two self-financed demo tapes ("Hammerhead" in 1986 and "Break Down The Wall" in 1989), a DIY hilarious video-clip for the song ‘H-Bomb’ in 1984 and took part in the compilation "Chicago Metalworks Battalion #1" with the song ‘Unleash The Dogs’ in 1986. All these songs and a live bonus track are now included in a collection CD released by the Portuguese label Lost Realm Records: limited to 500 copies and with a special 12 pages booklet. To me this reissue can be divided into two parts: the worthy one (the four songs from the "Hammerhead" demo tape and the compilation one), then the mediocre one (all the rest). The "Hammerhead" tracks are a prime example of EXCITER worship, with this forgotten trio from Chicago that offers us a bunch of very enjoyable and primitive Speed Metal hymns from the 80s. The typical ingredients of this genre are all present in a very genuine and impulsive way: fast, raw and furious MOTÖRHEAD like riffs, a galloping and nonstop D-Beat drumming, killer solos and a high-energy performance on vocals. A damn good and damn heavy demo tape, a rare debut recording session that is better than the majority of the new wave of old school Speed Metal bands. I can’t say the same about their second demo tape, in which MAELSTROM plays a less fast, less angry, uninspired and boring mid-tempo Heavy Metal style. In conclusion, I think that this compilation is a worth buying only for completists or if you’re a romantic Heavy Metal fanatic from Illinois, that maybe had the original versions of these tapes. But, if you’re new to Speed Metal and you want to approach this style, get some classic albums such as EXCITER’s "Heavy Metal Maniac" and "Violence And Force" , because they’re for sure a better choice. www.lostrealmrecords.com