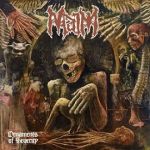 Swedish Death Metal outfit MAIM are back after six years of more silence than violence and it seems like there has been quite a lot going on within this bunch of grave-robbers. As of recently, the band operates as a duo only with the drummer and one half of the guitar duo remaining. Even though it sounds as if this whole record was recorded with Chris Reifert on vocals I think it’s the guitar-ripper who did put his screams from below on tape as well. The record itself starts with some usual intro stuff that leads into track number one which has the very tempting and AUTOPSY-ish title ‘Coffin Gloryhole’. The song itself reminds more of the earliest Swedeath outfits and has a nice little twist to it as soon as the second riff comes in. After that we have hints of AURA NOIR in a Death Metal disguise, of course some AUTOPSY, CELTIC FROST and therefore self-explanatory the British godfathers of all that is evil. The sixth track ‘Skeletons’ then closes off the A-side of this record and puts some spice into all of it. Compared to the rest it’s a quite atmospheric instrumental track with hints of demonic US Death Metal when it comes to the guitar-work. Definitely the highlight of the record in my book of souls. The B-side again delivers some more Swedish influenced stuff with the opening track followed by a nice and very surprising clean guitar instrumental. ‘The Gnarling Dead’ then represents the most AUTOPSY sounding track never written by AUTOPSY and therefore is definitely another standout song. Super slow maggot-infested riffs! After that it’s two tracks left which vary from fast to mid-tempo to slow and finish the record off in a good way. In case you already are a MAIM fan you will love this new record. In case you’re a big AUTOPSY fanboy you should probably check this one out. In case you’re into Death Metal in general you’ll probably also be into what MAIM serves you, but if your taste in music and all other things is generally shitty and you think that AVENGED GAYFOLD is the next big thing in Heavy Metal music I think it’s very interesting that you found this website and read this review, but now FUKK OFF – www.facebook.com/pages/maim/166087683425331, www.soulsellerrecords.com