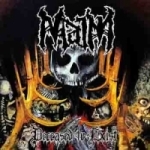 Two years after their debut “From The Womb To The Tomb” Sweden’s old schoolers from MAIM strike back even deadlier! It’s a fact that there are tons of young bands out there right now who try to reclaim the old feeling. Lots of goodies, but also many copycats! In case of MAIM this second album is the living proof that these four youngsters stick to their guns and in my point of view “Deceased To Exist” is in all aspects (songwriting, artwork and production) the step to the next level! What started with the debut in a more naive AUTOPSY worshipping way has become now more authentic in sound, more catchier in its songs and with the class to be mentioned as a release being able to delight fans of REPUGNANT, SERPENT OBSCENE, NECROVATION, TRIBULATION & Co in the classical morbid way!!! Of course the addiction to Chris Reifert’s classics is still there as well as a rotten flavor of early NIHILIST / ENTOMBED and DARKTHRONE, too. Nothing new, but executed deadlier and better as before as a tribute to the necro and rotten way of Death Metal. 10 tracks far away from blastbeat and plastic sound trends, simply putrid and purged through napalm as one of the songtitles states it already!!! If you appreciate the reverb infected way of vocals and generally this new wave of young but real (!) Death Metal addicted bands from Sweden, then this second effort of MAIM should be a “must have” on your list!!! Available as digipak CD and vinyl from www.soulsellerrecords.com or check www.myspace.com/maimdeathmetal.