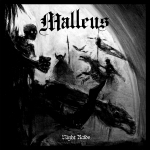 After an EP that in length and number of songs seems pretty much like a full-length album (originally a tape the band released that was later re-released on CD and vinyl), here we have another EP, this time with just two tracks. MALLEUS ("Hammer" in Latin) is a trio from Boston, Massachusetts, and explicitly play a mix of DISCHARGE and HELLHAMMER. Black D-Beat, I hear you say, has become a bit of a trend of sorts, mainly since DARKTHRONE decided to make it so, but these guys do it better than most. There is a cool edge to their deliberately primitive and raw sound, and raw production, even though the latter is powerful and befitting. The vocals are higher in pitch than Tom Warrior’s and are the one element that may evoke later Black Metal times (although, to be true, this singing style did directly stem from Quorthon). After an intro of a war with swords, horses and screams of the dying, the musical war begins, downtuned and crushing. ‘Night Raids’ is a brute battering-ram of Black Crust Metal, a tank undeterred by the obstacles of the landscape. It even has some phantasmagoric background solos of sorts that add to the feeling of impending destruction. The second track ‘The Wretched’ looms a bit and when the vocals kick in it charges into total HELLHAMMER fashion and goes on somewhat slower than the title-track. Slower, but effective, with simple but catchy riffing and an outro with wind and ravens in the aftermath of the battle. If you are into stuff like TOXIC HOLOCAUST or MIDNIGHT or, better still, the founding fathers of the eighties (back a little into the seventies in the case of their Punk influences), you could indeed fare far worse than listening to this very good EP. Listen to the band and get more info at https://malleusheavymetal.bandcamp.com.