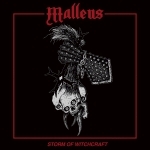 MALLEUS emerged from the mysterious vicinity of Boston and they proclaimed their beginning through a self-released tape during the autumn of 2016. Blood Harvest Records resurrected that wicked desecration and represented it as the debut album of MALLEUS, titled “Storm Of Witchcraft”, which is now released on CD, 12" vinyl and cassette tape formats. This record was mixed and mastered in Side Two Studios and like a relic from the lost time, in “Storm Of Witchcraft”, MALLEUS sound embraces the low-tuned crusty legacy of DISCHARGE combined with the gnarly and ferocious spirit of HELLHAMMER, early CELTIC FROST and BATHORY. Although many have emulated and evolving the spirit of the forefathers of Black Metal, in a genre where nearly all ideas are basically reworked carrying out of the masters craft, MALLEUS seems like a possessed blood soaked integrity in combining worship and imagination. The first noticeable matter is they didn’t try to reproduce the low-fi sounding production like in the glory days, but captured a low and gritty sound with a production full of warmth which in process elevated the abrasive, raw, and energetic approach of this record. In one of their interviews, the MALLEUS guitarist expressed their visions and thoughts behind the sound as – “At that time, everyone we knew in the Boston Punk scene was obsessed with DISCHARGE and really raw D-Beat. So, all these uninspiring Dis-clone bands started popping up everywhere, which only fueled our discontent with the current state of Punk. I was absolutely obsessed with the “Satanic Rites” tape by HELLHAMMER and “Hear Nothing, See Nothing, Say Nothing” by DISCHARGE as well, and decided that instead of just doing another boring D-Beat band, I’d take my obsessions in a different direction.” Being sincere to their thinking, in this seven track debut MALLEUS enchantingly blended the brain damaging Crust beats with a timeless aura of wicked mid-tempo riffing which never gets tedious no matter how much every band reproduces it. From the feral beginning of ‘Winds Of Wrath’ which channeled the insanity towards the ‘Demonology’ series and ends with the menacing ‘Storm Of Witchcraft’, in unison MALLEUS delivered a praiseworthy creation which reverberated the spirit everyone likes to think is dead and buried long ago or hurriedly dismiss as futile re-creation. History can never reinstate the originality and energy that spawned in the first wave era of this genre but “Storm Of Witchcraft” will question the wits of naysayers and upon repeated exposure this deadly first strike by MALLEUS will take you back to the forever possessive and primordial aura of Black / Speed Metal. Explore the release at: http://malleusheavymetal.bandcamp.com, or visit their label page: www.bloodharvest.se.