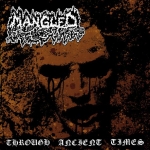 Apart from releasing new records, Dutch Vic Records earned a good credit for some well compiled re-releases of forgotten gems during the last years. A fine PHLEBOTOMIZED compilation in 2013 comes to my mind rather quick, for instance. With their countrymates MANGLED, they again dug down deep in the graveyard of dead and forgotten bands. MANGLED existed for more than fifteen years before splitting up about a decade ago, having three albums and two EPs in their discography, all of them for tiny labels. This compilation, fittingly titled “Through Ancient Times” now combines the first MANGLED album “Ancient Times”, both EPs and the two demos the band recorded with some alternative versions and live tracks. This means more than two hours of music on two CDs. The first CD shows us a band on the search for a way of their own. It starts off with the three tracks (plus one intro) from the “Cadaverous” demo from 1992. This first sign of life depicted MANGLED as a pretty Thrash laden Death Metal band that tried to slow down in speed and ended up neither fish nor fowl. The second demo “Perish”, that came a year later, was much more rooted in contemporary Doom Death of those days, the opening ‘The Emptiness Of Being’ even featured female vocals and keyboards. Besides this not too original idea (even back then), the demo was pretty monotonous and not that thrilling, except for the final ‘Perished Innocence’ that clearly turned out to be the most interesting track here, since it has the most punch and speed. MANGLED seemed to have recognized that as well. The first tune on the cassette EP “…In Emptiness” (from 1996, originally on the infamous Wild Rags label) walked the same path. ‘Bathe In Blood’ is a rough song, pretty diversified in speed and gorgeously raw. ‘Psychodead’ and the live recording of ‘Call Of Silence’ from the second demo were more rooted in Doom Death again, even though the first one is better than most songs from “Perish”. The first disc ends with two songs from the first demo, who were recorded live on radio. Yet these recordings sound even rawer than the versions on “Cadaverous”, but the title track and ‘Disentomb’ gained some punch still. The centrepiece of disc two is the first MANGLED album “Ancient Times”, originally released in 1998. This album presents us a band that has matured over the years and found a way that keeps the balance between Doom and Death, rooted in the sound of Stockholm. On the one hand, there are brutal, old-fashioned tracks like ‘Bathe In Blood’, that was re-recorded for the album, or ‘Goatrider’. But on the other hand there are songs like ‘The Sleeping Paradise’, that has a fine melancholic atmosphere, or the quiet ‘In Ancient Times III – Bellum Gallicvum’. But as the highlight, MANGLED have saved their band anthem for last, a song that combines all sides of the band in a very harmonic way. The last previously released studio recordings on “Through Ancient Times” are the two original tracks from the "Carnal Abhorrence" 7” EP from 2004, that showed MANGLED as a real Death Metal band. The title track as well as ‘Body Dismorphic Disorder’ sound more American, underlined by the fact that the original EP also included MORBID ANGEL and CANNIBAL CORPSE cover tunes (that weren’t included in this compilation). Yet these two originals are not on the same level as the album, but nice ones anyway. As a bonus, the second disc features four additional live tracks. The purified version of ‘The Emptiness Of Being’ is rather negligible, but the version of ‘Interred’ from the first demo is recorded such roughly that it even has a touch of old school Crossover. An alternative and much rawer version of the album tune ‘Eve Of Mourning’, in a pre-production demo version, is followed by two live versions of songs from the second MANGLED album “Most Painful Ways” (2001). ‘Warfare Embowelment’ and the short ‘Hellrose Place’ (nice play of words, by the way) are walking the same path than the two songs from the “Carnal Abhorrence” EP, stylistically and qualitatively. So, after listening to more than two hours of MANGLED, there is to state that not every song of this band was worth being re-released… Check out http://mangled.bandcamp.com or www.vicrecords.com to see for yourself.