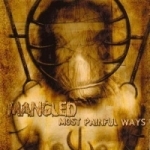 MANGLED are a part of the Dutch underground scene for already quite some time, but unfortunately never made it to a really wider audience as for example SINISTER did, which is mainly caused by the rather small labels who put out their releases so far. On this second full-length album, almost everything is right and the way it should be to call “Most Painful Ways” a really good Death Metal album, starting with the nice cover-artwork, the very clear and powerful production (which they did by themselves!) and 10 brutal Death Metal tracks which differ quite a lot from each other. I would also say that the band has a good and brutal sound (where you can hear lots of influences from American Death Metal bands, MORBID ANGEL came to my mind several times) which isn’t really new or revolutionary but it works out really well and that’s what’s most important. The playing abilities are on a high standard I would say and the vocals also sound the way they should and are not too extreme (not in the ‘barking dog’ style), so I could really recommend this to every Death Metal fan out there. The vinyl version has a cover of ‘A Skull Full Of Maggots’ (CANNIBAL CORPSE) as a bonus-track by the way.