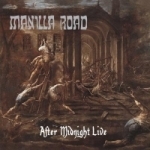 This LP was recorded live on air at the KMUW radio studios in December of 1979 and contains 5 songs which were never released before. But I have to be honest, I don’t know too much about MANILLA ROAD or their music. I know their name but never really listened to them. So maybe this record is not the perfect start. I read that the band is rated as the founders of the style Epic Metal and on this release you can hear the beginning because these songs were recorded even before their first record “Invasion” was released. So the songs are Hardrock to early Heavy Metal with hints of the epic stuff that will come. I don’t want to talk too much about the music because after listening to it, it’s not my cup of tea. The songs didn’t hit me and I am not getting warm with the voice of Mark Shelton. Considering that this is a live recording at a radio station the sound is ok. So in the end I think this record is for die hard fans and collectors of MANILLA ROAD. The LP again is absolutely awesome. The record has a really great cover and the sleeve is a hard paperboard. It also contains an inlay with lyrics and photos. This time the vinyl is 180g and the record is also limited to 1000 copies. So well done again High Roller Records. www.myspace.com/manillaroadofficial, www.high-roller-records.de