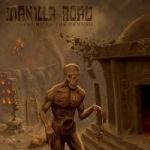 One of the longest running and most cult-ish US Epic / Heavy Metal bands, Kansas-based MANILLA ROAD, have come really far – I mean REALLY damn far in their career. "Playground Of The Damned" is the band’s already 15th (yes, 15th, can you believe it) full-length studio album – under the MANILLA ROAD’s name, during their whole career that started way back in 1977 already. Just like many other Metal bands that started out in the late 70s / early 80s, also MANILLA ROAD did split up in early 1990-91 – just to reform in 2000 again, only with a different line-up compared to their early period. Vocalist, guitarist, founding member – and first and foremost, songwriter Mark "Shark" Shelton, is one hell of a genius and talented man, I must admit. By saying ‘genius’, there must be something special in him, to be proved out of his ingenuity and musical talent, right? Well, just think of this, how many bands today, have maintained to ‘keep it true’ for themselves for not completely changing the style of music, from one album to the other? There aren’t many of them – and perhaps even rarer amount of them have kept their Metal hearts pumping the same blood for well over 3 decades. "Playground Of The Damned", this latest 8-track studio record from MANILLA ROAD, is a carefully crafted, old school Metal record that people can freely call Power, or Epic, or Heavy, or Doom – or whatever-in-hell Metal record, because this very album in question has bits and pieces from all those aforementioned Metal genres pulled into each song on the record. As its bold enough wholeness, this record may not sound so overly mammoth and epic-like as – let’s say, "Gates Of Fire" (2005), or "Voyager" (2008), but at any rate "Playground Of The Damned" has this very trademark-ish MANILLA ROAD old school Metal tone stamped all over the place on the record. Also, I have to say I really happen to like the way how Mark sings on this record, having put lots of feeling and overall emotion into his vocal lines. With addition of Bryan "Hellroadie" Patrick’s lower – partly gravelly voice (check out his vocal performance in the last track of the album, ‘Art Of War’. Did I already say the man can really sing in an amazingly emotional way? Well, now I did. The guys together create a nice contrast on the record, supporting each song’s best interest to make them to stand out on their own – sometimes better or worse. There’s heaviness, there’s melodies, there’s diversity of the material, there’s enough hooks, there’s the moody moments that catch your attention like a true drama queen in action, etc. – everything else really that eventually makes you admit in the end of the day that "Playground Of The Damned" truly made your day. This record made me happy and satisfied – and I bet it also has a tendency to make you happy and satisfied as well. www.manillaroad.net, www.shadowkingdomrecords.com