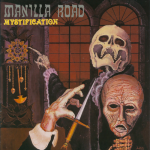 For Odin’s sake, it’s MANILLA ROAD! Writing reviews of their classic albums, such as "Crystal Logic", "Open The Gates", "The Deluge" or "Mystification", should be prohibited by international law – as these are monuments and ultimate masterpieces of what we call Epic / Classic Heavy Metal. But as Shadow Kingdom Records is going to reissue one of them, let’s bring few facts. This is the sixth studio album of the Wichita Metal legend, and is usually listed as one of the classic MANILLA ROAD full lengths, together with the 3 other mentioned earlier, and "Out Of The Abyss" that was released in 1988, one year after "Mystification" came out. Except Mark Shelton we can hear on this one Scott Park on bass, and the amazing Randy Foxe. Yes, AMAZING. Young Heavy Metal drummers should actually worship this album: forget about DREAM THEATER, just play "Mystification", listen to the drums, and try not to crush your jaw on the floor. It’s also worth mentioning, that this version is the first one to be released on CD in the original song order along with the original mix and mastering: so yes, we are going back to 1987, and we will be able to hear the album in its original shape. So if you weren’t happy with the reissue that came out in 2000 (new artwork, different mix / mastering, different song order), then this is your chance. And music? 9 tracks. 9 monuments. 9 legends. This is what Heavy Metal is all about: up the hammers and down the nails, hail MANILLA ROAD! More information: www.manillaroad.net and www.shadowkingdomrecords.com