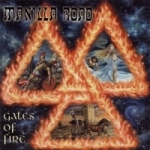 Back to the roots? Hearing the first song ‘Riddle Of Steel’ makes one doubt so as its pace seems slightly unusual for one of the oldest American Metal bands, MANILLA ROAD. Also, the barking of Bryan "Hellroadie" Patrick scared the shit out of me. I mean – we know that from "Atlantis Rising" already but starting the record with it is sort of a shock at first. But then, there comes Mark "the Shark" Shelton with his nasal voice around the corner, soothing my first rejection. I mean, the first song is not too far from old Swedish Death Metal (and I don’t just say so in order to piss off their record label boss Andi – tune down those guitars and you’ll see what I’m talking about). To be honest, it’s not so much of a surprise because the band has always been open to all sorts of music and blended it into their vision of Epic Metal. Listening to the whole CD underlines the record company’s info sheet, though: three trilogies as epic as can be, long and moving. The first trilogy was influenced by Robert E. Howard’s "The Frost Giant’s Daughter" while the other two deal with Roman and Greek history or mythology. The Hellroadie takes over the high pitched screams we didn’t get to hear ever since Mark damaged his vocal chords in the late 80s. In my opinion he’s definitely a gain for the band, not only on stage. The only point of criticism I have to make is the weak sound: we’ve grown accustomed to the thin guitar sound on MANILLA ROAD albums over the years (still, it’s a disgrace for a guitar hero like Mark to come up with such a sound) and most of all: the drums! Sounds like somebody banging on his frying pans! And Cory Christner is an excellent drummer! Scheiße! Still, the material on here simply breathes the very soul of Epic Metal and for my taste even beats the new CANDLEMASS album! Maybe it’s a bit too early but MANILLA ROAD definitely have a good chance for having released my personal album of the year! People missing the days of early MANOWAR will simply dig MANILLA ROAD as soon as they get accustomed to Mark’s voice. MANILLA ROAD are not as straight forward – ar rather – "heroic", though. http://truemetal.org/manillaroad