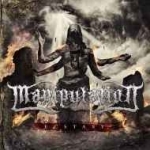 Another case of a band that’s around for a long time, but never crossed my way before. And after listening to the third album of Poland’s MANIPULATION, I wished they haven’t cross my path at all. Their current album “Ecstasy” just evokes the opposite while I listened to it. The five piece blends brutal Death Metal with too many technical aspects, adds staccato riffs plus elements of so called Deathcore and Metalcore. Sounds haphazardly constructed? In fact it is! The sound resulting of that unformed style is packaged in a production that comes along too modern. So we have a hardly bearable album that any traditionalist will despise for sure. And, honestly, as often as I tried to get along with “Ecstasy”, I always failed. It’s just nothing for me, even though it is well played. If you want to find out more, visit their www.facebook.com/manipulation.net or www.satanath.com