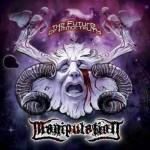 It was about one and a half years ago that I had to deal with the Polish band MANIPULATION and their still current album “Ecstasy”. Despite the fact that I wished the band hadn’t crossed my path, I took over reviewing duties for their re-released and remastered first album from 2007, “The Future Of Immortality”. What did I hope for? Well, maybe I thought that the first album often is the best. Or it was the wish that the band was more rooted in original Death Metal ten years ago. Well, these hopes and wishes were unfounded. Even in their early days, MANIPULATION played their brutal Death Metal in a way too modern style, at least for my taste. The elements of Deathcore or Metalcore maybe weren’t as distinct as on “Ecstasy”, but already an important part of the sound of the band. And the effects in a New Metal style didn’t make “The Future Of Immortality” any better. At the latest when the third song ‘Demand Of Purity’ tortured my speakers, the issue was over for me. MANIPULATION will never be a band for a traditionalist like me until they change their style completely. I’m pretty happy that their home town Gołdap is far away from the area of Poland I often visit. Otherwise I always have to take care if there’s any mumbled “Kurwa!” or “Zabij!” from the bushes… If you need to find out more, visit: www.facebook.com/manipulation.net. If you want to get a copy anyway, go to: www.satanath.com/distro