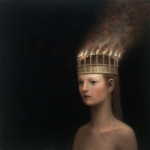 Sometimes you don’t need to be a full band to create a monstrous, crushing and damn fuckin’ tight sound. Aside from BÖLZER, North German band MANTAR is a perfect example for this hypothesis. The duo gets on without a bass player, and when you listen to their first album “Death By Burning”, you don’t even miss the bass anyway. The guitar is that much tuned down, there’s no need to add a bass guitar. Risen from the Hardcore based Noise and Grind scene in Bremen (with bands like MÖRSER, SYSTRAL and ACME), the band is now located in Hamburg. And this musical foundation has left a certain influence in the music of MANTAR. So this album was done to prove that there are still musical borders that are to be destroyed. The borders between all those heavy musical genres were torn with “Death By Burning”. You thought Stoner Metal combined with Black Metal can never work? Think again! MANTAR are both and even none of these genres. It’s heavy Blues Rock as well, it’s sludgy Hardcore and it’s Doom Metal. It’s just MANTAR! One of the very few bands that create music so unique, it refuses every lame attempt to be stereotyped. And so fuckin’ heavy and inimitable grooving, yet spooky and atmospheric. The opening ‘Spit’ already left me without question, heavy as fuck, grooving, battering… And the final part with only the drums accompanying the sick vocals just pierces the brain. The groovy ‘Cult Witness’ with its fast outbreaks paves the way for the sick ‘Astral Kannibal’. This one comes along with a crude sense for sometimes even psychedelic melodies and grooves that any Stoner band will be proud of. ‘Into The Golden Abyss’ and ‘Swinging The Eclipse’ are just tearing you down with their breaks and grooves, accompanied by tons of steel to rip you apart. Another completely unexpected killer is ‘The Berserker’s Path’, that just turns out to be a short stop-and-go groove orgy with a story told, not sung or shouted. With the following ‘The Huntsmen’, MANTAR created another monster with outbreaks, crude melodies and grooves, a song that could serve as their trademark song. In the end we have ‘The Stoning’, a song that is pretty basic in its more reserved arrangement, leaving space for the rough vocals to unfold. Close to the end, MANTAR present us ‘White Nights’, a slowly grinding Doom monster that crushes everything in its way. To calm down a little bit, MANTAR close the album with the atmospheric and spacey instrumental ‘March Of The Crows’ in a comparatively laid back manner. Yet this one’s also heavy as fuck. Thus endeth a damn impressive album. “Death By Burning” is a fuckin’ monolith of heaviness, that impresses even more when you remember that it’s just a duo performing here. But what works out in the studio impresses even more on stage. Just three days ago MANTAR answered the question if their music works out live with just the two members performing with a (too short) hell of a show here in Bremen. Amazing! Be sure to check out this monster of an album at: www.mantarband.com, www.facebook.com/mantarband, or the label site: www.svartrecords.com