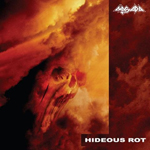 MASADA got my attention because former IMMOLATION & GOREAPHOBIA drummer Craig Smilowski played on the “Suffer Mental Decay” demo from 2011. Meanwhile Craig left the band and vocalist Cazz Grant (CRUCIFIER, GRAND BELIAL’S KEY) took place behind the drum kit. I really liked the complex but raw sounding dose of Death Metal of that demo and was really looking forward to future releases. And here we have “Hideous Rot”, a mini album (the CD will be released via Deathgasm) containing two new songs, a weird tune with a flute (performed by Clive Jones from 70s Occult Rockers BLACK WIDOW) and the two songs from the aforementioned demo. The line-up change did not affect the quality of the music. Those two new songs are on the same high musical level as it was on the first demo. It’s wild raging and raw Death Metal with twisted and complex structures and some weird guitar stuff. As aforementioned there are two different recordings on this MLP and I don’t like it if I have to listen to different sound qualities on one release… maybe I’m too picky here but I think that sucks. By the way, the weird flute tune called “Fluteotherapy” is definitely too long (3:20min) and definitely too weird for my taste… a short version of this as an intro would have been cool but this is the second longest track here!!! Anyway, that doesn’t mean “Hideous Rot” is not a great release… it absolutely is. I really like the unusual song-structures and the dark demonic atmosphere, the vocals are great as well. To sum it up I would say this is a remarkable mini album and I really hope they’ll will bring out a full-length rather soon. Thumbs up! www.facebook.com/masadadasam, www.bloodharvest.se, www.deathgasm.com