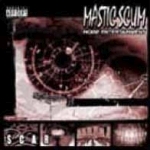 The second full-length by Austria’s Grindcorers MASTIC SCUM is entitled “Scar” and not a bad at all release. The music is good and it’s well played but the thing is what they do is something very similar to what NAPALM DEATH did on “Diatribes” or “Inside The Torn Apart” (the kind of Grindcore more based on the effective and groovy mid-tempos, using some blast beats from time to time and adding a bit of experimentation), and the vocalist must be the fucking twin brother of Barney Greenway… You know, I think that a band formed in 1992 and having so many release as they have (one 12″EP, one demo tape, one 7″ EP, one live tape, split CDs, tapes, and 7″ EPs with FLESHLESS, MALIGNANT TUMOUR, MIXOMATOSIS, BLOCKHEADS, SENSELESS, C.S.S.O., HAEMORRHAGGE and ROTTEN SOUND plus two full length CDs) has had to gain more personality through the years of experience in the underground… It’s good to love some bands and use some influences of them but to play exactly what they play makes no sense. They say that they are something like a mix between NAPALM DEATH and MELVINS, well I haven’t listened to the second band but I think they play kind of Punk / Hardcore music, but I am not sure so I can’t tell you if MASTIC SCUM are influenced by them. I really like the parts in the NAPALM DEATH vein (90% of the entire disc) because these guys play them really well, the other parts are not my cup of tea. Anyway the sound is very good and all here has the typical Grindcore and Hardcore clichés (just look at the cover art and the song titles…) so the followers of this style will enjoy “Scar” for sure.