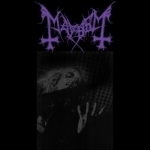 Libraries have been filled with legends about THE TRUE MAYHEM in general, and about "Live In Leipzig" in particular. To some, it is a barely listenable live album, while to others, it is one of the defining documents of Black Metal. The truth, as usual, is somewhere in between. "Live In Leipzig" was originally released in 1993 on Obscure Plasma, which later became Avantgarde Music, run by Roberto Mammarella of MONUMENTUM. The "deal" at the time was that Euronymous let Mammarella release this in exchange for the rights to release the MONUMENTUM debut album "In Absentia Christi" (which wasn’t even recorded back then) on Deathlike Silence. But then again, he had big plans: TORMENTOR, ROTTING CHRIST and MASACRE should have been on his roster, and DARKTHRONE threatened Peaceville to go with Deathlike Silence as well. So, essentially, what we have is THE TRUE MAYHEM: Euronymous, Dead, Necrobutcher and Hellhammer, surrounded by mysterious legends, and bigger the sum of its parts. The flyer for the show in Leipzig advertised MAYHEM as "Death Metal" – and it makes sense in retrospect. The older songs that were being played that night are "Deathcrush" and "Pure Fucking Armageddon" material, and the newer ones (‘Pagan Fears’, ‘Funeral Fog’, ‘Buried By Time And Dust’, and of course ‘The Freezing Moon’) were the framework of what was to become "De Mysteriis Dom Sathanas“, much darker than anything else the band had ever recorded, and in fact much darker than anything else that was around at the time. This record is a document of a band in transit, finding their way from juvenile yet extreme gore-ridden lyrics to darkness and evil – and let’s be honest: there is no nicer way to explain an Interrail trip by three Norwegians and a Swedish dude. No matter how ambitious and uncompromising Dead and Euronymous were in shaping the entire Weltanschauung of a genre, they were 21 and 22 year old… well, boys at the time. So far, there are 35 (thirty-fucking-five!!) versions of this record available, including all the colors, test presses and bootlegs, while "Dawn Of The Black Hearts" has ‘only’ 33. Go figure. While the original Obscure Plasma release had two more songs – ‘Carnage’ and ‘The Freezing Moon’, off of the "Projections Of A Stained Mind" compilation – this one here can be considered the ultimate and final document, with tons of old photos, flyers, even correspondence, and extensive liner notes by Hellhammer, Necrobutcher, Metalion and Fenriz; in other words: essential for fans and completists. The second disc offers something that has only been around in shabby bootleg form for ages: the "Live In Zeitz" recordings. Recorded 2 days prior to Leipzig and having pretty much the exact same tracklist, minus ‘Pure Fucking Armageddon’, the Zeitz show is even rawer, nastier, more fucked up – it sure as hell ain’t no "Mediolanum Capta Est" or even "Live in Bischofswerda", that much is sure. But those are just the cold, hard facts… now let’s talk about those cold, hard riffs and vocals. Twenty-five years ago, there were rumors about an album that would put every other album to shame: "De Mysteriis Dom Sathanas“. Looking back now, it’s interesting to remember how everybody already knew how good it would be. Dead mentioned that mysterious book and brought forth visions of fog ridden cemteries, and Euronymous created the entire ideology. If you talk the talk, you better walk the walk – and Lord Satan knows Euronymous did both. The vision he had and the demons he literally and proverbially summoned at the age of 22… wow, just wow. And while I will be the first to admit that Snorre Ruch’s THORNS riffs and Attila Csihar’s insane vocals were what made "De Mysteriis…" the monoliothic masterpiece that it still is, these days at the end of 1990 were what defined MAYHEM and Black Metal. They even slowed down the "Deathcrush" material to a crawling pace, taking their own songs and re-inventing them in a way that countless imitators could only dream of. And it’s all documented here… in its rawest form. "When it’s cold… and when it’s dark… the freezing moon can obsess you!" www.thetruemayhem.com, www.facebook.com/mayhemofficial, www.peaceville.com