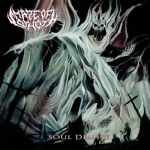 Everlasting Spew Records from Italy is a fine label and has released some very cool stuff so far. The debut album “Soul Demise” by MAZE OF SOTHOTH is such a high quality product. I would describe MAZE OF SOTHOTH as a semi technical brutal Death Metal band, not far away from its country mates HIDEOUS DIVINITY and HOUR OF PENANCE but with some more MORBID ANGEL, VADER and IMMOLATION vibes. Compared to a standard so called brutal Death Metal band this Cthulhu worshipping horde somehow differs a lot when it comes to the songwriting and the atmosphere. All songs of “Soul Demise” have its very own identity. Sure, this is a fast and brutal album but speed and brutality are not the bands main intention. They wrote real songs and not just added some riffs to some blast and some blasts to some riffs. Everything fits perfectly together and so the band created a great, varied and remarkable album with a dark atmosphere and a heavy dose of brutality. Everything just kicks ass, the drumming, the guitars, the vocals, the sound and the songs. But I won’t name or recommend any songs because the album works as a unit. MAZE OF SOTOTH is definitely one of the most promising Italian Death Metal bands and absolutely worth your attention… So you better obey the Great Old Ones and get your copy of this killer release as soon as possible. www.facebook.com/pages/maze-of-sothoth/128360949975, www.everlastingspew.com