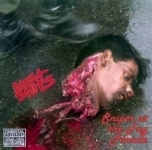 What would you expect of a band, that has released such intellectual offerings as "Violence Against Feminist Cunts" or "Fuck Frenzy"??? Well, nothing but total perversion and political anti-correctness that’s almost beyond description, but I try it anyway: "Sniper At The Fag Parade" is dedicated to all "Proud Bitch Fucking Heterosexuals" and is the MEAT SHITS attempt to attack anything that is gay, bisexual or Punk Rock, because most Punk bands are also homosexuals. The "Heterosexual Fag-Bashers" from the US of fuckin’ A also support the rather idiotic opinion, that AIDS is a gay-disease, but I’ll think one should not take their views too seriously. Musically the MEAT SHITS unintentionally (?) out each other as being homosexuals themselves, because they use a fuckin’ drum computer, sound like DEICIDE played through an Elephant’s asshole and even dare to use Dance Music-like samples in a few songs. The production is worse than most demos and after track 9 the whole thing starts too bore as shit!!! I would be lying, if I would tell you, that "Sniper At The Fag Parade" did not make me laugh, but even as a "Proud Bitch Fucking Heterosexual" myself, I can’t help getting the impression, that the MEAT SHITS are nothing but a bunch of redneck imbeciles, who try their best to be provocative, but turn up being totally stupid. To amuse a European you have to come up with more than just braindead statements and awful musical crap! Check out their label’s site, because it promotes also much better bands than the MEAT SHITS: www.moribundcult.com