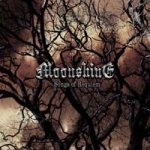 Normally I am not so fond of symphonic Black Metal or similar stuff like that. But MOONSHINE’s debut album "Wake Up The Moon" from 2001 surprised me a lot back then. So I kept my eyes open upon the band’s development. Now finally I hold the band’s new album in my hands which is entitled "Songs Of Requiem". I am sure not many Metalheads here are familar with this outfit from South Korea. So what can you expect here? It’s hard to put them into a roster as the duo Amon & Giga (reinforced by Pain as a guest musician who handles the bass, synths and who was also responsible for the production) incorporates elements from different Metal styles. The basic is a kind of symphonic Black / Dark Metal (the keyboards are present through the entire album, sometimes they are used more, sometimes less). But this would not meet MOONSHINE’s entire music (founded in 1996 in Seoul). ‘The Other Side (Of Me)’ has fast, aggressive parts besides the heavy, mid tempo sections. ‘Endless Fall’ is an excellent Metal tune, with a great hypnotic riff. ‘Domestic Creatures’ is a heavy track with traditional riffing and a fast outbreak in the middle while ‘The Song Of Retrospect’ reminds me (from the basic riff) a little bit on old MY DYING BRIDE stuff and ‘Lady In Black’ tends also in that direction, heavy and solid. Amon’s vocals are deep and rough, so don’t expect hysterical screaming in the vocal department. The musicial skills of these Koreans are outstanding and the atmosphere on the album is dense. I also don’t need to tell you that the sound is nothing else than excellent as well as the presentation and packaging (booklet). I would recommend this album for fans of symphonic, blackened or Gothic Metal out there and to people who also would like discover bands beyond the well know paths. Contact the band www.moonshine.co.kr or the label www.dopemusic.co.kr.