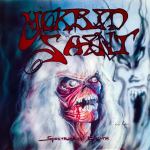 To have a copy of MORBID SAINT’s legendary debut album "Spectrum Of Death" was a status symbol, for quite a long period. It either meant that you are devoted fan, who purchased it back when it was released, or a teenager who spent all the dough he had received from his parents on is birthday. Even the bunch of re-issues that were released during the last decade – got sold out rather fast and became rather sought after and expensive again. I must admit that I missed out on all of them somehow, since each time a re-release was made – there was a feeling that this time around – the stock will last for a while. Wrong. Hopefully – this time it will, because this album is really as good as the hype around it tries to present it. This is one of the most savage sounding Thrash / Death Metal albums ever recorded and every note played in it is pure anger and hate. Those who aren’t familiar with the album – SADUS (well, except for the fact that the bass can barely be heard in MORBID SAINT’s music most of the time), DEMOLITION HAMMER and NUM SKULL could be used as a reference. Expect a damn raspy guitar tone, mostly very fast playing, very heavy pounding drums and vocals that sound like a more extreme version of "Pleasure To Kill" era Mille Petrozza. Expect to hear many twisted riffs that sound like horror itself in this album! "Spectrum Of Death" is pretty much as good as the genre can get and would be worth a purchase even without the bonus stuff that appears on this version, released by Century Media. The only complain I have is that the mastering is quite loud and some clipping can be heard, especially when it comes to drums. Most of those who will listen to the CD through a crappy boombox will probably be blinded by the fact that they finally could purchase it and won’t notice these details, though. As for the bonus stuff – the other stuff is a demo version of a few tracks from the band’s second album "Destruction System", then comes the second CD with that album itself and then come a few brand new songs, recorded by the band upon reunion in 2010-2011. Long story short – that means that each part is worse than the part before it. The band broke up somewhere during the recording process of "Destruction System", so that album wasn’t released back in the early 90s (except for a bootleg version in the mid 2000s) and got officially released for the first time only a few months ago. The songwriting got more mid-paced in that album, contrary to the debut’s unstoppable stream of speed, but not even this is the problem. The problem is that it’s a rather 1/4 baked product in terms of sound. The guitar is muddy in a very uncool way and the vocals and the drums are way too loud in the mix. The drums also sound damn shitty and clicky. When these 2 CDs are played one after the other, it’s easy to notice how much better the demo versions of the songs sound. The demo, despite its "demo" quality, sounds way more organic and masculine than the album "Destruction System" itself. To end the listening experience in an even more bitter manner – the 4 last tracks show why it’s a horrible idea for a Thrash band to make a comeback and try to write songs after a 2 decades long hiatus. Expect a rather worn out vocals version and a dose of mediocre music that is infected by really annoying breakdowns – probably an idea adopted from some shitty Deathcore band that shared the stage with MORBID SAINT on some festival, right after they reunited. Well, at least Century Media didn’t add a bunch of bootleg quality live recordings to smear them on 5 vinyl records, for the sake of selling this "one great album + a pile of filler" as a box set, the way they have done with TREBLINKA’s stuff! Long story short – the 2CD version is worth a purchase and it’s better to grab your copy before it gets too late. Those who not only like "Spectrum Of Death", but also enjoy "Destruction System" despite its horrible recording quality – it’s even a better deal for you! www.facebook.com/pages/morbid-saint-official/132339530166104, www.centurymedia.com