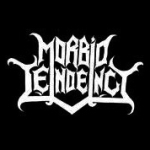 An eerie intro that could have easily been stolen from a classic Italian horror flick sets the right gloomy mood before a thrashing riff kicks in and Israelian MORBID TENDENCY take us on a highly enjoyable ancient Death Metal journey. The whole affair reminds me of a hybrid between Sweden’s CREMATORY who flavoured traditional SweDeath with a more American heavy groove, some Finnish darkness and occasional headbanging passages not unlike early DEICIDE. During the fast picking of the first riff of ‘Under Dark Eclipse’ you will probably also think of the buzzsaw guitar sound on the CEMETARY (Swe) debut while the atmospheric old school keyboard gives me the same spine-chilling effect as in DARKTHRONE’s legendary "Cromlech", and that is of course a compliment. While the band name is generic as f**k and makes the band way too easy to overlook, I can only insist on checking them out no matter if the classic US Death Metal school based around Thrash based riffage or the Scandinavian way of turning raw Punk into utter darkness are your particular fave. Main composer and multi-instrumentalist Alex – bassist in SONNE ADAM – has been doing MORBID TENDENCY for quite a while now on his own using a drum machine while on this EP SONNE ADAM’s Tom Davidov stepped in on drums and also as "producer". While sounding rough around the edges and some might complain about the loud drums, I really, really enjoy these tracks and hope it will not be the last release from this outfit. Great basic Death Metal that sounds very refreshing in a time where most acts either hail Sweden, hail INCANTATION demos (minus having the great songs) or AUTOPSY (whose perfect mix of lunacy and genius is simply impossible to reproduce) and forget that a genre named Thrash even existed. Where’s the old SLAYER in today’s Death Metal? Well, dunno. At least these guys here did not march straight forward into the "underground trend trap" and came up with something damn good that is still old school to the rancid bone! www.morbid-tendency.bandcamp.com, www.facebook.com/morbidtendency