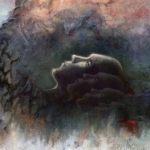 MORBUS CHRON is a great band. Or at least they used to be, as it looks like after this album, few of their fans here and there will stop following them. Yes, their debut album and both EPs were absolutely awesome, so the name MORBUS CHRON started to be respected in Death Metal circles, and many old school maniacs started to consider them as one of the most promising Swedish acts. Of course only time will tell, but it looks like the guys decided to follow the wrong path. It’s basically hard to put the "Death Metal" label on "Sweven" – sure, we have these dark, haunting and evil sounding vocals here (like taken from the first OBITUARY album or some ancient Death Metal demo), headbanging rhythms and cool riffs from time to time, but like 50% of the album is filled with Prog Rock instrumental passages. The idea itself is really awesome, and it’s easy to understand their intentions, but come on, clean guitars in 9 songs when we have 10 on the album…? It’s really hard to survive 4-5 songs in a row, as the guys are also using the same few chords almost all the time (yeah, forget about about any melody) – so basically after 15 minutes you will start to wonder if you are listening to the same song, or if it’s already a new one. It could be something really cool, as from time to time it sounds like Death Metal mixed with a GHOST kind of band, and we all know MORBUS CHRON has really huge potential and possibilities. Of course taste is a personal thing, so check it out yourself, and decide yourself, as discovering music is and always has been something amazing. And who knows, maybe you will like "Sweven"? Hopefully the awful front cover artwork won’t discourage you. More information: www.facebook.com/morbuschron, www.centurymedia.com