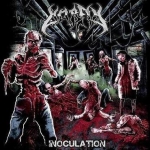 After a demo entitled “Crystal Darkness” in 2011, Cali Death Metal youngsters MORFIN now deliver the full-frontal assault and debut with their first album attack “Inoculation” on F.D.A. Records who have brought us many excellent (old school) Death Metal slaughterfests from CHAPEL OF DISEASE over DESERTED FEAR to the amazing SKELETAL REMAINS, SLAUGHTERDAY etc.! Heavily and I mean HEAVILY inspired by “Leprosy” era DEATH (a cover of that particular album’s title track is also included), early OBITUARY and MASSACRE during “From Beyond” – honestly, the only element of “individuality” is a few blasted beats now and then – “Inoculation” is a true snorefest for Death Metal fans looking for fresh, innovative, visionary sounds. MORFIN are a worship band, no doubt about that, but if that is what your ears desire “Inoculation” certainly delivers a rock solid neck breaking slab of Death Metal with tracks like ‘Dark Creator’. However, you can still hear the typical flaws of a debut nowadays: the songwriting is a bit stiff and predictable, the hooks and memorable lyrics not perfectly worked out, sections occasionally appear “glued” together rather than flowing naturally and so on and so forth. Don’t get me wrong, this might sound harsher than it is actually meant, but please take my crappy lines here as a constructive piece of advice to improve and weed out the weaknesses as I’m the first person on the planet going nuts for a band replicating the glory of the classic late 80s / early 90s US Death in perfection. Overall, it’s a fun record yet like many upcoming bands staying one or two years longer in the demo phase, consolidate the songs, filter out the strong sections might have reduced the effect of “Inoculation” quickly paling besides the aforementioned genre milestones. MORFIN steal well, sure thing, but in 2014 at least I demand a bit more. You can check out ‘Dark Creator’ here. Buy it here: www.fda-records.com. More about MORFIN at www.facebook.com/morfindeathmetal