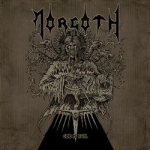 When I was a young Death Metal lunatic MORGOTH was one of my favorite bands. Their early 90s live performances were so overwhelming, fucking intense and brutal like hell and I also absolutely love the first two MLPs “Resurrection Absurd” and “Eternal Fall”. The debut album “Cursed” was cool, too but I didn’t like the sound too much. I absolutely never liked “Odium” and totally hated “Feel Sorry For The Fanatic” and never understood how a great band could change its course so drastically. So I was rather skeptical when I heard that MORGOTH would return but fortunately their comeback shows were quite enjoyable… sure there wasn’t the magic and intensity of their early days but MORGOTH proved that they still know what Death Metal is all about. Unfortunately they also had to record new music… and as much as I enjoyed their live shows I definitely don’t need new MORGOTH songs (same goes for MASSACRE, by the way…). Well, here’s the first new MORGOTH songs of the new millennium, released via their old label Century Media as 7” EP. And the result is nothing more than lame second-rate Death Metal. Sure the songs are not total crap at all… but great Death Metal is something different. The title track is a traditional Death Metal song in the vein of the “Cursed” album. As aforementioned it’s not a shitty song but it sounds constructed and lacks the feeling and passion for Death Metal. It’s obvious that MORGOTH used the “how to create a Death Metal song manual” to compose it. “Die As Deceiver” seems to be a mixture of the two albums “Cursed” and “Odium” and this combination sucks. I never liked those boring riffs on “Odium” and absolutely do not like that stuff this time. Marc’s vocals on “Die As Deceiver” also sound somehow weird and way too Hardcore-ish for my taste. There are countless young and fresh Death Metal bands around nowadays so there’s absolutely no need for retired veterans to return just to bore us to death with half-baked stuff… More info at: www.morgoth-band.com, www.facebook.com/morgothofficial, www.centurymedia.com