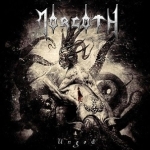 For everyone who rather approaches new MORGOTH stuff with caution, don’t fear “Ungod”! It’s a pure Death Metal album! One with ups and downs but all in all a quite good one. They managed a successfully balanced act between old school music and modern styled sound. Gladly no need for any vicarious embarrassments (found it!), which those mixtures sometimes imply. It’s a straight trip back to the 90s. Without being an old man run for shelter in their past-thing. Yet the opposite is the case. The whole album exhales a pretty fresh charm. They definitely unpin their relationship with old styled Death Metal, which is one main column of that album. The other is the further development as a gang and as musicians. The theme song ‘Ungod’ would be the perfect example for what I am trying to get across. From doomed down tempo to furious double bass parts and melodic riffing. The song combines all the characteristics of old and new on this LP. While creating a moment where you find yourself sitting with keen interest for what will happen next. Even if you might think this is something you already heard a couple of times before. Choosing DISBELIEF singer Karsten Jäger for the vocals was another good choice. He fits just perfectly in the concept. I’d say with “Ungod”, MORGOTH released an album which is worth listening. For die hard fans maybe a must have and for all others at least a must check out! Special feature is the digipak version which comes with two extra songs, including an unexpected, but therefore very nice cover song. www.morgoth-band.com, www.facebook.com/morgothofficial, www.centurymedia.com