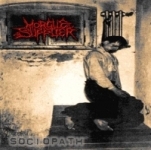 Nothing new baking under the sun – just some corpses and body parts in various stages of decomposition. This more or less sums up my impression after giving various listening sessions to the output of this American five-piece. The thirteen tunes here are a somewhat old school – influenced hybrid of Deathgrind and Grindcore to my ears… no leanings towards modern slam or frognoise stuff. Instead the band goes for a varied songwriting approach – not only fast blasting but some mosh parts and midtempo passages are thrown in-between topped by a double vocal performance. The production is ok I guess and the musicianship is solid – fans of this particular genre will most probably agree. Some of you might find it interesting that this band consists (or consisted) of former members of CREMATORIUM (Chicago… I only know one Italian band of the same name… where are you now???), IMPULSE MANSLAUGHTER and EYE GOUGER (I remember I ordered their “Ass Rotor” EP just because of the utterly hilarious cover, hehe…). As I am not the most enthusiastic supporter of this kind of Grind the disc got a bit boring after some songs even though one can see the potential – also the certain twist that makes a band more special than others is missing for me but fans of Goregrind might want to check this out as it is quite solid and the cover will fullfill your craving for real life gore. No comparisons musically – let the mp3 on their page speak for themselves. A new three-track CD should be out by the way. Homepage: www.morguesupplier.com