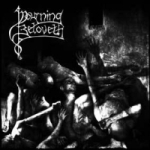 MOURNING BELOVETH
A Disease For The Ages
(Grau Records)
55:58min

I first heard of these miserable Irish fuckheads via the last issue of the unforgotten Moondance zine, where their demo was chosen as demo of the month. Not the worst reference, especially since the guy responsible for that magazine at the time seemed almost wholly consumed by Neo-Folk and the likes and despised most Metal. Also their first two albums were very well received by the underground, making them rank pretty high in my imaginary ‘gotta check these guys out sometime’ – list (I’m pretty sure a lot of you are familiar with this kind of nerd-phenomena). Yet it was their third full-length “A Murderous Circus” that marked my first contact with their own special brand of Doom and that bleak monolith of dreariness and submission to suffering surely left some scars. And even if the band calls their new record their darkest offering yet, I feel that this time they added some more shades of black to their sound, compared to said album that was drenched in an aura of grey, impenetrable nothingness. The opener ‘The Sickness’ forces the devout listener to his knees right away, Doom perfection to die for. Compared to “A Murderous Circus” the guitar sound has been unmistakeably beefed up and the whole atmosphere is that of insatiable longing and deeply felt misery. Still the overall atmosphere seems a bit more passionate compared to the rather apathetic hopelessness that dominated their previous offering. Maybe it’s the (sparse) use of clean vocals – which I’ve honestly wouldn’t have missed – that gives this a more classic Doom spin. Not all of the five tracks reach the heights of the humbling opener but every minute of this fine hour of Doom is filled to the brim with noble despair and a spark of timeless grandeur. Feverish – devilish – relevant! www.grau.cd