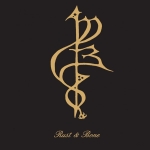 The Irish Doom institution MOURNING BELOVETH turned out to be a point of shame for me personally. And I’ll tell you why: this band is around for more than two decades, released their first (of meanwhile five) full length album in 2001 and always received good resonance from press and fans. Yet this band still passed me by all the time. Me, the guy who is into all kind of Doom Metal for ages! The fifth, therefore newest album “Rust & Bone” honestly was my first contact with MOURNING BELOVETH. And, judging by this album, it was very due time for me to get familiar with the five piece from the Kildare area. “Rust & Bone” features only five songs, two of them are short songs at that, but the remaining songs are longer ones instead. Just take the opening ‘Godether’ with more than 16 minutes of running time. Yet this one is a very diversified song, including breaks, desolate guitar melodies, mainly slight tempo changes and acoustic parts. And a musical direction that reminds me of older MY DYING BRIDE and ANATHEMA, blended with the atmosphere of early IN THE WOODS… The latter one are either present in the only fast outbreak of the album. The overall feeling of the song is darker than death and therefore damn black. The other long track ‘The Mantle Tomb’ is of a similar quality and style and appears to be the centre piece of the album, embedded by the two short and more laid back instrumental tunes. These are the parted title tracks ‘Rust’ and ‘Bone’, the latter paving the way for the most unique song on “Rust & Bone”. ‘A Terrible Beauty Is Born’ is more or less the invention of acoustic Doom! This dark masterpiece has some folkish influences and turns out to be darker than black in its atmosphere. Since I haven’t heard a tone of what MOURNING BELOVETH have released before, this new album forces me to extinguish my lack as soon as possible. Those of you who made the same mistake should take “Rust & Bone” as the door opener to MOURNING BELOVETH. Check ’em out at the following sites: www.mourningbeloveth.com or www.facebook.com/mourningbelovethband and visit their new label as well: www.van-records.de