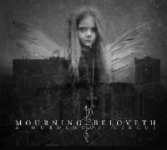 The Irish Death / Doomsters have turned into a quite productive act within this genre and deliver their third opus with “A Murderous Circus” after the fantastic debut “Dust” in 2001 and their second effort “The Sullen Sulcus” in 2002. While musically retaining more or less the same formula as on “The Sullen Sulcus” the individual playing time of the five songs offered here exceeds anything the band released so far thus turning this album into one that needs time and concentrated listening to fully develop its desperate, gloomy atmosphere, but if you dare to invest this time you’ll definitely be rewarded afterwards! “A Murderous Circus” is another strong, extremely diverse album blending influences from MY DYING BRIDE, OPETH with their unique melodic feel and an emotional intensity during the clear sung parts (which were so rare on the 2nd album) that always makes me think of countrymen PRIMORDIAL. The high amount of variability on this work comes from the diverse riffing covering traditional crushing Doom riffs where every single note seems to be a dark eternity, the melancholic guitar melodies that always have been the catchy element in MOURNING BELOVETH’s sound (a good example therefore: the opener ‘The Apocalypse Machine’). In addition to that there are Darren’s incredible vocals ranging from fierce low growls over tormented screams, spoken and whispered passages to the aforementioned capturing clear vocals he uses impressively especially in track four ‘Nothing (The March Of Death)’, my favourite on this album. Productionwise MOURNING BELOVETH again have a crisp and clear heavy sound, which was forged at Klangschmiede Studio E, thus you can entirely indulge in this long, sinister journey of depression, damnation and shattered hope. So if you’re into moderate, perfectly done Death / Doom be sure to give this album a chance and buy it along with its predecessors (if you did not do that already)! There will also be a special edition of “A Murderous Circus” containing a second CD with one of the best MOURNING BELOVETH songs ever entitled ‘Part I’ which appeared on a split EP with LUNAR GATE and was re-recorded for this release as well as another new song called ‘Disintegrate’. www.grau.cd