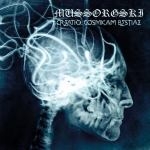 The Russian composer Modest Mussorgski, who lived and died in the 19th century, was one of the most influential composers of his era. In modern music, he left big footsteps either, since the British Prog Rock trio EMERSON, LAKE AND PALMER recorded an absolutely fantastic Rock adaptation of his best known opus “Pictures At An Exhibition” in 1970. Mussorgski also left his mark in the Metal scene, with the well-known German MEKONG DELTA being huge devotees of his works that have recorded various of his compositions in Metal arrangements. Naming your band or project after this highly influental and well renown composer is either a sign of a great self-conscience or of megalomania. In the case of the Polish one-man-band MUSSORGSKI, it’s at least hubris. Their third album “Creatio Cosmicam Bestiae” trudges through eight mostly pretty long songs in a dangerous triangle of symphonic Black Metal, Ambient keyboard boredom and musical ambitions. The opening ‘Gaaya – The Planet Of The Dead’ as well as the following ‘God Is In The Neurons’ are not that bad at the first impressions, yet I asked myself when the songs get going too often. But with the short interlude ‘Stellar Core’ and even more with ‘Sabbathum In Perpetuum’ and its enervating first seven minutes of boring keyboards, the album meets its Waterloo. MUSSORGSKI are stuck in randomness and too much deceleration, so that it’s really hard to keep concentrated on the music. Maybe a Black Metal enthusiast will find more in “Creatio Cosmicam Bestiae”, they are welcome to check out the following links: www.facebook.com/pages/mussorgski/1392790830992953, http://mussorgski.bandcamp.com. For all label related information go to: www.godzovwar.com