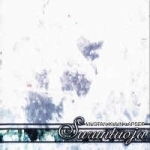 Don’t let yourselves be disoriented (or repelled) by the strange moniker of this band who come from Finland (and from where else?). This four piece claim a span of existence of ten years now, but “Suruntuoja” is only their first release. Imagine the classic era DARK TRANQUILLITY playing sophisticated Black Metal and you will get a fair idea of MUSTAN KUUN LAPSET’s music I guess. The Black Metal overtones come essentially from the Pete Lehtinen and Pete Tamminen vocals and also from some chords used, but note that MUSTAN KUUN LAPSET don’t rely on the Black Metal imagery at all (no corpse paints in sight that is). The music is very delicate and elegant while sounding very powerful. Synths are used from time to time, only to underline some atmospheres. An album I could compare this one with is NIGHT IN GALES’ “Toward The Twilight” (this one being a little gem, savagely underrated) because of developed sense of melody the Finnish musicians display. “Suruntuoja” is a very “autumnal” album, if you see what I mean, the music is tainted with melancholia but a flamboyant one, I am not talking about depression and self-pity. Unfortunately, I can’t say if the lyrics confirm my feeling, because they are all written in the Finnish language. The production is faultless and serves the music adequately, that means you forget about it very fast to be engulfed only in the musical MUSTAN KUUN LAPSET universe. To be honest, I would never had bought this album on my own, due to the awkward moniker and the somewhat banal cover art, but I am glad to have it after all because “Suruntuoja” is a very enjoyable record, nothing more and nothing less. If you are a nostalgic of the beginnings of the Gothenburg scene, you should investigate their case, reminding yourselves though that MUSTAN KUUN LAPSET are not copycat but are able to produce their own brand of melodic Death / Black. Very interesting! And you can call me a freak, because I even found some 70’s PENTAGRAM overtones on one track! I let you guess on which one! Contact: www.mkl.cjb.net.