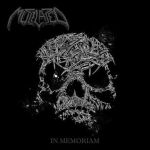 If any underground Death Metal band out there ever deserved the re-release of their classic recordings then it’s without a doubt French MUTILATED! These guys started out as MUTILATOR back in 1986, but changed their moniker into MUTILATED about a year later already and officially recorded 3 legendary demo tapes in their rather short-lived existence: "Omens Of Dark Fate" (1987, still as MUTILATOR), "Psychodeath Lunatics" (1988) and "Resurrected" (1991). All those have previously been re-released on vinyl already (also through Triumph Ov Death Records) and are now finally available on CD as well. While AGRESSOR, LOUDBLAST, MASSACRA and DEATH POWER all ended up with record deals back then, MUTILATED unfortunately never got the opportunity to record a full length album. But that doesn’t mean that they wouldn’t have deserved it. In fact, an album from these guys would most certainly have blown away any release of their countrymen with ease! So, if you have never heard of MUTILATED so far, please leave our website right away and read another one that is far more rooted in mainstream music. Everyone else is advised to check out this double (digipak) CD, which compiles everything these guys ever recorded. Disc # 1 features the aforementioned 3 demos, plus ‘Cabalistic Cryptograms’ (an unreleased track from the "Psychodeath Lunatics" recording session), the 2 tracks from the unreleased 1993 EP "Tormented Creation" and the 1994 ABYSSALS demo (a band that original MUTILATED drummer François "Jackhammer" Dauvergne played in for a short period of time together with vocalist / bassist / guitarist Michel "Nonos" Dumas). Disc # 2 features 9 rehearsal songs (recorded between 1988 and 1994, 4 of them unavailable on the band’s studio recordings) plus 9 live songs (from 1992 / 1993). The tastefully layouted booklet (24 colored pages) comes up with all original cover artworks, lots of old pictures, flyers, zine reviews, some band info and short liner notes from DARKTHRONE’s Fenriz and ASPHYX’s Martin van Drunen. When you listen to this compilation in a row, you get a pretty good impression of the band’s musical evolution, especially since the demos and EP have been added in chronological order to disc # 1. While the one and only MUTILATOR demo "Omens Of Dark Fate" still sounded like a rabid mixture of "Pleasure To Kill" – era KREATOR meets old POSSESSED, the first MUTILATED demo "Psychodeath Lunatics" already showcased a change in the vocal department. The extremely pissed off sounding voice from frontman Michel "Nonos" Dumas now was closer to what Kam Lee used to deliver during MASSACRE’s demo period. For "Resurrected" and the EP songs (both with an old MORBID ANGEL type songwriting and frenzy Trey Azagthoth soloing), MUTILATED had recruited Philippe Herbaut on vocals, who pushed the band even further in Death Metal territories with his deep growls (even though he was still far away from the guttural Death Metal vocal style that became common several years later). The MORBID ANGEL influence became even more obvious on the 1994 ABYSSALS demo, which unfortunately was the only release of this outfit. In 2005 Michel re-surfaced in the also highly recommended THE SEVEN GATES and released one demo, two EPs and a full length with them. But since their last EP "MMXIII" (which came out in 2013), it unfortunately became very quiet around them as well… Anyway, if you consider yourself a fan of raw thrashing old school Death Metal, make sure to pick up a copy of "In Memoriam" because this is classic stuff at its best! And if you’re into patches, pick up a copy of the limited edition, which includes a free MUTILATED patch of the cover artwork. For more information on MUTILATED check out www.facebook.com/mutilateddeathmetal. The label can be contacted through triumphovdeath@gmail.com or www.facebook.com/triumphovfvckingdeath